New Year’s Day is one of my favorite days in the entire year. Sure, the unbridled sense optimism and fresh start which the New Year undoubtedly brings is something that could be scrounged up if you tried really hard on any other day of the year but on this one day a year there is is the built-in possibility that I could actually make those positive changes which makes it special every year.

While I like to be inspired about all the exciting things in the year to come, I also love New Years for the party it brings the night before – especially the champagne. Can you think of a more regal, glamorous or Princess-worthy cocktail than a sparking glass of bubbly? I’ve tried and tried and quite frankly can not. The widely labelled father of champagne, Dom Pérignon, really did help out Princesses when he created his liquid diamond drink!

The sad part about champagne is that it’s very often just used to celebrate special occasions or brought out on special occasions as many people that I talk to are very unsure about it and would prefer to stick to the infinitely more common wine. Many NYE hostesses simply buy the customary bottle to have on hand so someone can try and saber the top off with a knife just before midnight and don’t give much of a thought to it otherwise.

Well, Modern Women… This is all about to change!

The most important thing you can know about champagne is probably the greatest fallacy about champagne. Contrary to popular belief, Dom Pérignon did not invent champagne. You’ll start off by impressing most people when you share this gem, but you will probably want to then be able to back up your knowledge with a little more about the history of champagne.

The term “champagne” is actually in reference to a region in France that has been producing wines for centuries, ever since the Romans planted vineyards in the area. The region first became famous when in 987 the King of France, Hugh Capet, held a coronation in the region- specifically at a town called Reims. The King used local wines in the coronation ceremonies and the association of the region with royalty greatly increased the popularity of the region’s wines. During the Middle Ages, there were many disagreements between regions and trade routes began to disfavour the Champagne region as the nearby Burgundy region was able to produce much higher quality full bodied red wines as a result of their more favourable growing climate whereas Champagne’s wines were all light red or pinkish. The disagreements resulted in a loss of business to the region and in turn the Champagne region concentrated on making the purest possible white wine out of their red grapes.This is the part of the story where the famous Dom Pérignon comes in – it was he that starting in 1661 created very specific steps to create the purest white wines out of those red grapes, and in trying to remove the pesky bubbles which kept popping up in the process. His work enabled the region to produce truly white wines out of red grapes and that fact garnered attention from across the pond in London where members of the nobility began ordering cases of wines from Champagne to be brought to England.

Oddly enough, it was the Brits who really started to understand the possibilities of champagne as a bubbly drink. When the wine was transported from France to England, it was done so in wooden barrels and then bottled in London for individual sales. While the wine was intended by the Champagne vineyards to be non-sparkling, it often did not make the journey as such. Thanks to advances in bottling such as re-discovery of cork and creation of more durable glass bottles, the wine would leave the cold winters of Champagne and the fermentation process would be prematurely stopped. When the wine was bottled (and warmed) in London, the fermentation process would start up again, often resulting in the now familiar popping of the cork off the bottles. In what I’m sure could be a matter of great debate between England and France, an Englishman published a paper in 1662 detailing how the bubbles could be made, strongly suggesting that the British were purposefully creating modern sparkling champagne before the Champenois.

It took the French until 1715 when Philippe II, Duke of Orléans became the regent to start gaining some of the popularity that it has today. Philippe was a huge fan of the Champagne region’s sparkling wine and as had been proven before, the Royal sign of approval meant that the popularity of the drink skyrocketed. The 18th century in France brought with it the founding of several champagne houses that are still popular today… Have you heard of Moët & Chandon, Louis Roederer, Piper-Heidsieck and Taittinger? There were still several advances in champagne to get it to what we we know today – such as advances in bottling, production on mass scale and others- but this is where the wine which is now hand-in-hand with luxury and celebration got its start.

There are countless brands of champagne – and much controversy about the use of “champagne” in others – and if you’ve listened to any modern hip-hop or pop music, you’ll be familiar with the main luxury brands. In case you’re not, here are a few of the bigger ones:

So now that you now know the history and biggest players in the champagne market, it’s time to get to the fun stuff- the enjoying it! If you’re going to spend the money to serve champagne at one of your fetes, it would be criminal to not serve it with the elegance and grace that is expected of a Modern Princess, wouldn’t it?

There are not very many drinks that have glassware specifically named for them to make your serving options crystal clear. Fortunately, champagne flutes are one of those things. You’ll absolutely want to serve your bubbly in the tall, thin and narrow flutes not only because they are eminently chic, but also because the shape of the glass is specifically designed to allow the bubbles to float to the top of the glass and release the best flavour of the champagne. I was fortunate enough to receive a set of Tiffany crystal champagne flutes and ice bucket from very dear friends as a wedding gift and while they don’t get used very often, the occasions I have used them have been perfected with their use. 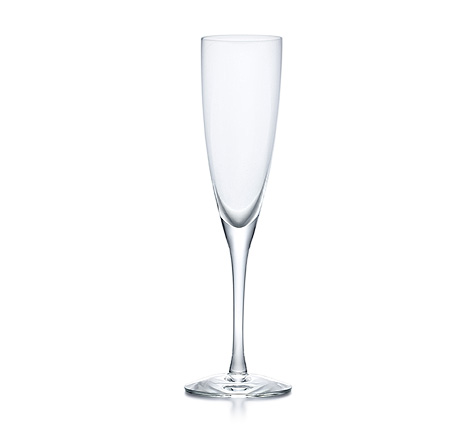 If you’re in the market for champagne flutes, they’re a worthwhile investment piece as again you’ll be breaking them out at weddings, anniversaries, births and New Years Eves for decades to come if you select quality glasses. Crystal is rougher than glass and produces more bubbles so is the best option you can choose. When you’re buying these expensive flutes, please remember to not just throw them in the (gasp!) dishwasher- they actually should only be rinsed and never have soap as it can ruin the future tasting experience. Tiffany’s selection are actually surprisingly cheaper than you’d expect plus I read that you can get them to sell you one flute for $20, and they’ll wrap it all up in Tiffany boxes to make it look like you spent a small fortune. If you’re in a pinch and don’t have or can’t currently afford flutes, pick the tallest and slimmest white wine glasses that you have and remember that the Modern Princess always has the confidence to make it look like even an accident was done ever so chicly on purpose.

One of the most important things you can do is properly chill your champagne before serving. I’ve had warm champagne before and can vouch that there is nothing you could do which would ruin the perfection of champagne like serving it warm. The best tip I’ve ever gotten was from my father-in-law, our family’s resident oenophile. His recommendation is to always store the bottle in a cool, dark place until an hour before you are ready to serve it. One hour before the cork will be popped, place the bottle in an ice bucket filled half with ice cubes and half with cold water. This will ensure that the liquid gold inside is cooled to virtually the perfect temperature every time hassle free.

The only part of this that I don’t enjoy is that when you remove and present your bottle to your guests, it will be wet and the label will almost inevitably be peeling off the bottle. With champagne where the label and branding is very important, this can ruin the presentation of a fancier bottle. If this is the case for you, you can cool it very short-term in the fridge (NEVER freezer as the champagne is too delicate) and then ensure it’s approximately 45 ºF or 7 ºC. 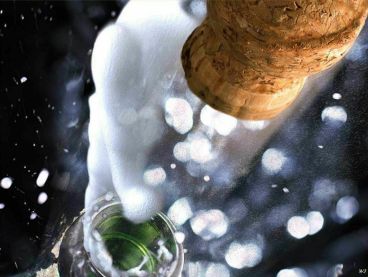 Champagne can be opened in three ways- two definitely more spectacular than the rest. Two are for show, and one is for actual enjoyment of the drink.

The Moment We’ve All Been Waiting For… Drinking the Champagne

Pick up your champagne flute by the stem of the glass to make sure that you don’t warm the contents with your hands and disrupt the perfect chilling you’ve achieved! Champagne is a sipping drink; so channel your inner Modern Princess, summon up all the elegance and grace you can muster and enjoy your liquid gold. 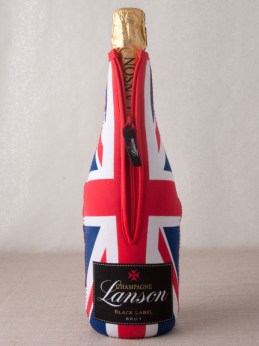 I hope that you’ll find your refined side while enjoying what is most certainly my favorite beverage.

There’s also a super adorable idea that’s been floating around Pinterest that you might want to consider- it’s purchasing smaller mini-bottles of champagne and then serving them to guests individually. These mini-bottles are perfect when you’re celebrating with a smaller crowd and you don’t want to open a whole bottle or for when you’d like a glass of champagne to celebrate something yourself. 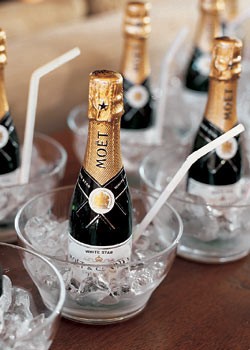 So we hope that this takes a little of the intimidation out of ordering, serving and toasting with champagne… And that you can spend this New Year’s – and many more occasions to come- toasting like the refined, elegant woman you are.

Amanda is the Operations and Media Director of Effervescence Group, as well as behind-the-scenes Editor at What Would Kate Do. When not sorting through HTML code, she can be found blogging at Croissant Crumbs.

Want to Know More About our Contributors?