In case you live in under a rock, let me tell you about the hottest things right now – The Hunger Games. The dystopian trilogy about Katniss Everdeen’s tribulations with an oppressive society and the revolution she sparks. With the recent release of the film franchise sequel, Catching Fire, everything Katniss touches turns to gold. 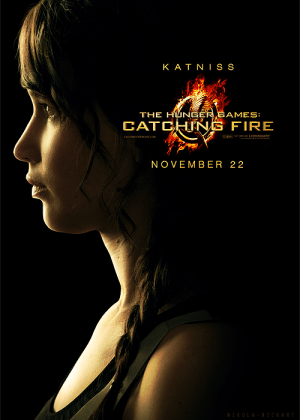 But why is Katniss so hot right now? Why is everyone, including us – who usually avoid fangirls and YA books – obsessed with The Hunger Games? Well, let’s see:

So, I asked myself – how can I be The Girl on Fire? Badass, lovable, fashionable, strong. What can I learn from Katniss? Well…

How to be like Katniss from The Hunger Games 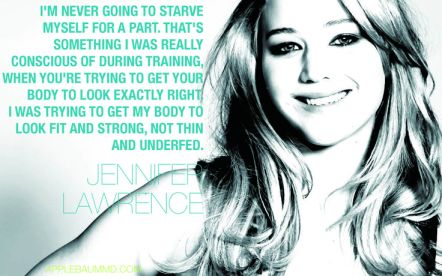 Jennifer Lawrence, who plays Katniss, has spoken quite a bit about her body image. Lawrence has expressed that she has no desire to be thin, but to be strong, fit, active, and healthy. If you Googled pictures of her in a bikini, she looks amazing, but there isn’t a washboard ab in sight.

Katniss has the same body image. She doesn’t see thin as sexy – it reminds her of her neighbors in District 12 who starved to death. Instead, she prefers a muscular build, a healthy meal, and a good chunk of fresh baked bread with cheese. If the bread-and-cheese thing hasn’t sold you yet, I give up.

The character stays strong through a healthy lifestyle. She often goes on long hikes through the woods. With no use for a car, she walks everywhere every day. This lifestyle seems so foreign to us First World Citizens, but taking one long, leisurely walk every day will make all the difference. Maybe you can’t walk everywhere, but you can walk somewhere. Katniss has also brought archery into the limelight. Between THG, Merida from Brave, and the super hunky American archery team, the ancient sport is having its heyday. During the 2012 Olympics, it was the most-watched event. Maybe you won’t be shooting squirrels out of trees, but some archery lessons would be a great experience. Not only will it be fun and thrilled, but you’ll be surprised what a workout it is for your arms.

And the best part about her is that she eats. She eats bread. Covered in cheese. Omg. She savors lamb stew and thick, hot chocolate. She enjoys these luxuries, balanced with lean meats, proteins and wild vegetables. In our imagination, here’s what her daily diet looks like:

She eats healthy, stays active, and prioritizes health. She isn’t thin, she is strong.

Katniss is lovable. The entire country falls in love with her, and she becomes a symbol for the revolution AND the oppressive society. You have to be really wonderful when both sides of a battle love you. But she is so badass – sparking a revolution, defying an oppressive regime, and making combat boots look fashionable.

Why is she so lovable? People love people who love people, and Katniss’ life is filled with love. She takes the place of her sister, knowing it meant death for herself. She protected her family for years, supporting them and providing for her mother and Prim. She protected Peeta and Gale, the uber sexy men in her love triangle. She is lovable because she loves. 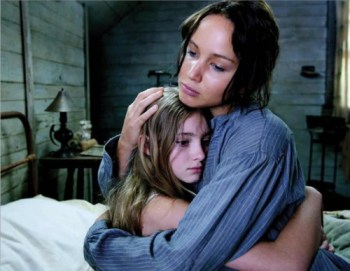 Why is she so badass? I don’t know, maybe its the unbelievable archery skills. Maybe its her ability to survive in the worst district. Perhaps it was her ability to outlive 22 other people in the first Hunger Games. She defied The Capitol. She beat the system. She risked her life for the greater cause.

Katniss fearlessly stood up for the people she loved. Badass and lovable.

Oh Katniss, you are so chic. Forgetting about her Capitol outfits, which were exaggerated and over-the-top, Katniss’ real style is why we love her. Tapping into this season’s best trends – edgy, utilitarian, grungy, and effortlessly cool – the Girl on Fire’s style is seriously on fire.

Katniss has a token piece – a Mockingjay pin. It reminds her of where she comes from, who she is, and what she stands for. This pin reminds her to stay strong at all times. Finding your own token to become a signature piece isn’t just a fashion statement, it is a reminder of your own strength. A meaninful pendant, a bracelet of strength, or an engraved ring can serve as a constant reminder of who you are.

Katniss also has some amazing style. Her clothes are utilitarian, yet chic. Think bomber jackets, skinny jeans, boots and t-shirts. Add a warm scarf and gloves. Subtract the jacket. Add a super cool jumper. Sprinkle in a dash of style and you’ve got her daily look. She is always in neutral tones – black, brown, grey, ivory – and always looks like she “just threw this on.” We’re obsessed with her knit cowl (seen above), but will settle for any of these Katniss-inspired pieces

Her beauty routine is also enviable. Sure, J. Law is naturally beautiful, but even the gorgeous Katniss adds a little eyeliner (okay, maybe not Katniss…maybe just the beauty department…) She goes for a fresh face, free from glitter or wild colors. A sheer BB cream or tinted moisturizer will protect her face. Neutral, non-shimmer shadow will define her lids. A thin, light brown liner draws attention to her barely-mascaraed lashes. Sheer gloss – or, more likely, vaseline – keeps her lips moisturized. Again, it’s all about effortlessly chic. She always looks this good. She doesn’t have time to apply a contour shadow, shimmery bronzer, and berry lip stain. And she most definitely doesn’t own anything named “Orgasm.”

Lets not forget the hair. Katniss is known for that signature “Katniss braid,” a thick, messy dutch braid to keep her hair out of her face while hunting. Or killing people. Either way… Braids are very stylish right now, and are a perfect solution for your 2-day hair. Start with textured hair, ideally slightly wavy, and follow the tutorial below:

When I grow up, I want to be like Katniss. I want to be strong, badass, lovable and fashionable. I want to help others and do the right thing and rock a pair of combat boots. Who inspires you?

Load More...
Follow on Instagram
Refined Gift Guide: The Shopaholic
A Lesson on Why You Should Never Compromise on Quality : SheInside Review