I have entered that wonderful, exciting time in every girl’s life – the one where all her friends are in loving relationships and the only men who will talk to me are confused foreigners.

Okay, they were normal, English-speaking British boys. But they were totally confused by my erratic behaviour.

My dear friends are in fabulous relationships with fabulous men. They really have chosen nice boys, ones who can stick around for a while. And with time (y’know, around two weeks into the relationship), they began talking about engagement rings.

Let’s inspect two of my friends. Ava* is a true NYC girl. She and her hedge fund banker boyfriend live on Central Park South and share a closet with coordinating pairs of Louboutins. His Gucci tie matches her Gucci bag. Meanwhile, Sophie* lives in Milwaukee in a four-bedroom home with her adorable pup, who helps her train to run marathons. She is dating the perfect guy for her – he rides a Harley; they go to Packers games together; he’s all masculine and can change the oil in her Mustang convertible. As I see my friends in these relationships, I take the time and their experiences to think about what I want in an ideal man.

So, when Ava and Sophie text me saying “we talked about engagement rings!,” I usually roll my eyes and prepare for the worst. But, what never fails to interest me is the startlingly different response in these conversations. Both girls are my dear friends. We all come from similar backgrounds, have similar values, but ended up in very different places. When we talk about “the ring,” it’s a strange conundrum.

As my mother says, “You can’t fry an egg on a diamond.”

(and I usually respond “you can if it’s big enough.”)

Ava and her boyfriend popped into Harry Winston early in their relationship. Ava ooh-ed and aah-ed over the classic pear shaped 4+ carat solitaire, and her boyfriend took note. Then they popped over to Cartier. Then Tiffany. Then Van Cleef and Arpels. Then they bought matching Louboutins. Not an exaggeration.

Sophie and her boyfriend recently popped into Tiffany, just to look. When I responded with “oooh! That’s so exciting! Tiffany rings can be really reasonable!” she responded unexpectedly. I had assumed that any girl whose guy could afford Tiffany would drop hints and (dare I say it) expect a little blue box. He can afford it. And, for God’s sake, they went to Tiffany, and yet she said “Oh, his friend owns a jewelry shop. I would probably get something custom from there.”

Harry Winston versus Custom Made by Local Jeweler.

One will be offensively large. The other will be exquisitely unique.

But which one is better?

Does Ava’s boyfriend love her more, because he spent more?

Does Sophie’s boyfriend love her more, because he designed it himself? 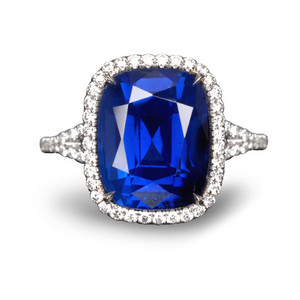 My future husband should take note that I know what I want.
I want sapphires, I want diamonds, I want white metal, and I want it to be offensively large and exquisitely unique.
But in the end, I want him to love me.